Color blast from the entrance of camping area in Manzhouli by caravan. Also ome more grasslands to visit and having a blast day including the Russian style Circus at Matryoshka Square.

Today is a busy day. Couple of places on the grasslands of Inner Mongolia and in the evening visiting the Russian circus in Manzhouli

On the road again and stopping by Tianbian Grassland Youmu Tribe sightseeing spot.

Following road G331 we ended up in the Tianbian tribe sightseeing spot. This is only a few hundred meters from the Russian border and you could see a small town on the other side. What I see, is the houses in Ergun city the design and even colors are more Russian than Chinese style.

Parked the caravan in the muddy parking lot and start to look for transportation to the sightseeing spot. The ride by minibus from the parking lot was fast-forwarding and we arrived at the place. The wetlands are surrounding the whole area, and as usual, Inner Mongolia is green and clean. In the distance, you could see a Russian village, maybe some kilometers and with the phone zooming in we could see the houses on the “other” side of the border. Would be nice to pay a quick visit but this time it is a no-go. spent here a couple of hours and needed to head for Manzhouli for the evening.

Noticed the towing hitch have been bent!

Since I drove out at the ferry in Dalian I have been following the towing hitch as it seems to be lower and lower. Today started to hear some strange noises from the back and checked it out.

The hitch is now touching the spare wheel and the supporting wheel of the caravan cannot be turned in the correct position unless lifted by the caravan. This is what you get with no brand equipment. Also, one other thing might be the tow ball weight is too much. In this caravan, the water tank is very close to the front and it is quite big for the small caravan. The size of the tank is 145L and there very limited place in the rear you can put the heavier items for balance.

Our car’s maximum tow ball weight is 100kg and later at the end of our trip measured it at around 130kg.

This does not mean the hitch should give up! More about this in my next blog post

We continued by road G331 and found another spot for activities. There are so many of these places all over Inner Mongolia where you can have horse riding, spectacular views, and other activities.

Here the main thing for the kids was the lamb. Feeding the lamb from the feeding bottle and I really think that was some sort of milk tea. The strange thing is that we have bows and arrows in Finland but the girls hardly use them. Now when needed to pay they are eager to shoot every time they see it 🙂

To the farm, we took a tractor that had two yurts installed on it and played local music which sounded very nice

No we will not go to Russia but this city is port entry to Russian trade. This city have been inhabited by Donghu, Xiongnu, Xianbei, Khitan, Jurchen, Mongols and Mancu.

In 1992, Manzhouli became one of the first land border cities opened up by the People’s Republic of China. It has since experienced somewhat of a boom as a center of border trade between China and Russia.

Checked little bit in advance where to go in Manzhouli and the clear winner was the Russian circus at Matryoshka scenic park with many of the famous Matryoshka nesting dolls.

I don’t think even the the circus in Moscow is as nice as this one. Absolutely worth the money with all included shows. Clowns, bears, acrobatics and even motorcycles in the “Globe of death”. This is a big circus compared to what I have experienced before and show was astonishing. I only can warmly recommend it.

All kind of Matryoshkas and even presidents and rock stars as big dolls. The light in the evening lit the whole area was bathing in different colors and shapes. The brightest one was the doll shaped hotel, yes it was shaped like the Matryoshka doll.

By the road G301 the Lager Palace hotel (direct translation by Google 拉格夏宫酒店) is the first one I was refused to stay due to having Chinese ID. That law have does not prohibit foreigners to stay but I think they did not want to do the dazzle with the documents that’s needed to be sent to Public Security Bureau. People want to have as little to do with authorities as possible.

Took it with no can do attitude, and did not want to negotiate. Wife and kids slept in the hotel and I had a good night in the caravan on the parking lot.

Next night we managed to get in contact with the nearby camping and we drove inside there instead. The campground was clean and spacious and could provide is with water and electricity outlets + dumping of the wastewater. Many tines we are too busy with activities so we forget to take pictures 🙁 . Don’t have any pictures of the camping area but if you need a camping place in Manzhouli this is a good one

Both the hotel and camping are fairly new. Could not find anything about the hotel in internet and it does not even show on Google Maps. They are maybe 200m apart from each other. Could not find this place in Baidu maps so the map point is very close by hot spring water world.

Didn’t realize before i closely look at the map that the campsite was 1.5km from China-Russian border.

The good and the bad according to our experience 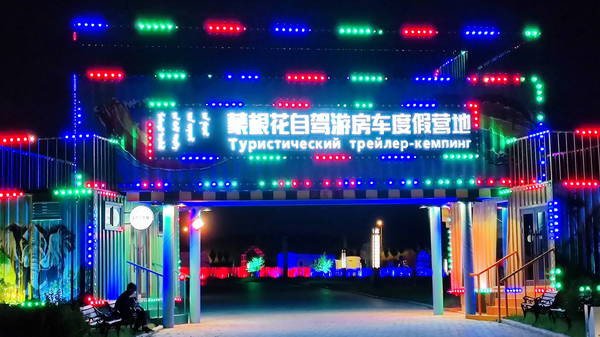